There was a big buzz in the poker playing community when PokerStars returned to the US. The first site was in New Jersey in 2016, and another site launched three years later in Pennsylvania. The third state to see the arrival of regulated online poker from PokerStars was Michigan, in 2021. PokerStars brings world-class software, an innovative range of poker games and generous player rewards and bonuses.

You can claim two bonuses as a new player at PokerStars:

After opting in and completing a Cash Hand Game, user will receive a total of three (3) chests worth an aggregate total of $50 described below:

Each chest must be opened within 7 days of receipt.

You can claim the $600 deposit bonus over three deposits within your first 60 days. You have to earn your bonus money by collecting Redemption Points in real-money games. You get $10 of your bonus for every 140 points you earn. There are 5 points for every $1 paid in either cash game rake or tournament fees.

These are generous and fast-clearing bonuses. Note that if you make a withdrawal before completing either bonus, you will lose whatever part of it was outstanding.

It’s available at FOX Bet Sportsbook, and other Stars-branded online casino sites and poker rooms. Rewards are personalized, depending on the games you play. You earn prize “chests.” As you climb up the tiers of the Stars loyalty program, the colors of the chest change to represent greater value. You start with a blue chest and then move up to bronze, silver, gold, diamond and black.

You can open your chests at any point, which contain personalized rewards. If you regularly play tournaments, you may get a free ticket, if you play cash games you may get a bonus and so on. These chests are worth opening, especially as you get to higher loyalty levels. Here is the value of rewards for each tier:

There are recurring and one-off promotions at PokerStars to incentivize regular players. There are leaderboard contests for multi-table tournaments (MTT) that award monthly prizes in Tournament Dollars, which you can use for future tournament buy-ins.

You will also find offers for Spin and Go tournaments (only available currently in NJ and MI), reload bonuses and freerolls that reward extra deposits. One-off deals can involve satellite qualifiers to live tournaments, online events like the NJCOOP and the PA version, or specials for new poker formats or holidays.

You can access PokerStars’ US poker rooms through your desktop computer and mobile devices. For the full range of games, the desktop download is the way to go. You can play PokerStars on either your Windows or Mac computer. This gives you access to resizable tables, Spin and Go tournaments and Zoom poker. It also allows for easy multi-tabling.

PokerStars provides apps for both Android and Apple mobile users. Whether on a smartphone or tablet, you can play Sit and Gos and ring games while you’re out and about. The iOS and Android app include the geolocation technology needed to prove you are inside state lines. 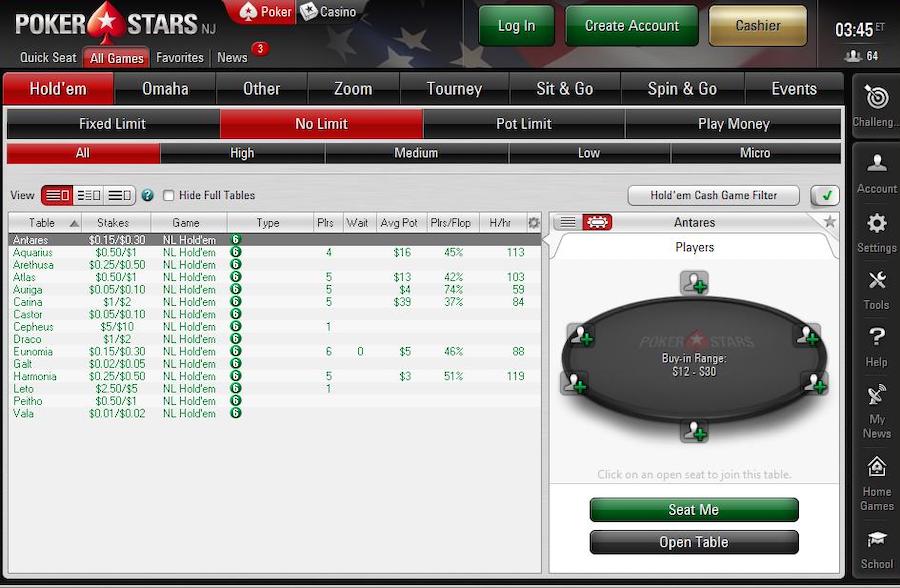 Navigating the various game options at PokerStars’ clients is easy. Across the top are the key games: cash games, Zoom, Sit and Go, Spin and Go and tournaments. If there are special events, these will be under their own tab; otherwise, look under the “Events” tab.

You now see the open tables, with stats showing pot size, players to flop and hands per hour. If you prefer, a quick-seat option will assign you a position automatically. Individual tables can be resized, tiled on your screen or stacked. They are smooth running, with options for chat, four-color deck and a toggle between showing your stack in big blinds or as dollar amounts. You can upload a picture to display at the tables. Since the state-specific player pools are smaller than the international version of PokerStars, which means some of the newer and more obscure games are not available, e.g., Swap Hold’em and Tempest.

You will find plenty of choice in the most popular game formats. Here is an overview: PokerStars also offers home games. These allow you to set up private or public games or tournaments and invite your friends or colleagues to play.

PokerStars NJ was the first site in the US to launch in 2016. This followed the resolution of legal battles (and ultimately a fine) for remaining in the US after the Unlawful Internet Gambling Enforcement Act of 2006.

Even though rival sites had a head start, PokerStars quickly made up ground in terms of traffic. They are now second to the combined WSOP/888 sites, which also have Nevada and Delaware traffic. With cash game peaks of more than 600 players, and many times this in the tournaments, PokerStars NJ offers plenty of action. Its NJ partner is Resorts Casino in Atlantic City.

The showcase event for NJ players is the New Jersey Championship of Online Poker (NJCOOP). This is a series of online poker tournaments, with some giant guaranteed prizes, varied game types and structures. A big focus on satellite qualifiers ensures that players with smaller bankrolls get to take a shot at big money.

As things stand, the Pennsylvania PokerStars site does not share traffic with the New Jersey site. This type of sharing would bring substantial benefits to PokerStars’ players. PokerStars PA launched toward the end of 2019 by partnering with Mount Airy Casino for its PA license.

With 24-hour peaks of more than 1,500 cash-game players, this site has proven even more popular than the NJ version. There are many times this number of players focusing on tournaments.

Like in NJ, there are big online poker tournament events for PA players. The PACOOP offers everyone a shot at the big buy-in tournaments with huge prize guarantees via satellite qualifiers.

PokerStars launched in Michigan in January of 2021, becoming the first poker site to go live in Michigan’s new regulated online poker scene. They are partnered with the Odawa Casino Resort.

To fund your account and take advantage of the two bonuses at PokerStars, you will need a secure payment method. PokerStars gives you a variety of choices for both deposits and withdrawals. You can even pay at the casino cage of Resorts Casino or Mount Airy Casino.

Note that PokerStars will allow you to set deposit limits as part of their responsible gaming commitments. Where possible, the site will also ask you to withdraw from the same payment method from which you deposited.

Here are the ways to fund your US PokerStars account:

The games are fair and your funds are secure at legal, regulated US poker sites. Additionally, PokerStars segregates player balances from its operating funds. Furthermore, the operator is licensed and under the watchful eyes of the gambling control boards in NJ and PA, respectively.

Third-party testing guarantees game fairness at PokerStars. Using a random number generator (RNG) software, the games are tested and certified by Gaming Labs International, which is the gold standard of independent auditors.

Wrapping Up: Are US PokerStars Sites the Best Legal Online Poker Rooms?

With amazing software and innovative games, PokerStars may be considered the best. When the new sites opened in MI, PA and NJ, they were welcomed by poker fans. While the player numbers do not compare with the international site, there are plenty enough opponents to make playing at the US PokerStars sites enjoyable.

When big events run, like the NJCOOP and PACOOP, the spike in player numbers is noticeable. You can qualify for the big prize tournaments in satellites, meaning everyone has a shot at the big money events.

Cash games now include Zoom poker with Spin and Go mini-tournaments giving you a shot at a huge jackpot. Whether you enjoy the innovative new games or prefer to grind out profits in a regular cash game, PokerStars has it covered.

New players get a generous bonus, either $50 in free play or deposit bonuses of up to $600. Once you start playing, Stars Rewards awards prize chests that are valuable bankroll boosters.

Check out your local PokerStars site in Michigan, New Jersey or Pennsylvania today.

No. The famous $1 million guaranteed Sunday Million is part of the schedule of the international poker room. In US poker sites, you can only play against other in-state residents, making the tournaments smaller. The equivalent is the $30,000 guaranteed Sunday Special. When online poker events such as the ‘NJCOOP’ run, you’ll find some big prize tournament action.

Technically, yes. Although the games don’t run as often as on the global site. Once PokerStars are able to share players between states, Zoom should be available all the time.

Whatever name you come up with when you register is the one you will be stuck with. Make sure you don’t pick a name you might regret later.

100% fair. While many (often bad) players complain that online poker is rigged, there is zero evidence that this is the case. PokerStars have dealt billions of hands (just hit the 40 billion milestone to be exact), and every test / audit and tracking database says the same thing – that the deal is random.

Yes, this site is licensed by the New Jersey Division of Gambling Enforcement under Resorts Casino B&M license. To legally enjoy online poker games, you must be 21+ and inside the state borders.

Similar regulatory measures are in place for the PA and MI sites.

In NJ it is the largest single poker room – though 888 / WSOP offer more games and tournaments. That is due to sharing of liquidity between 888 / WSOP in New Jersey, Delaware and Nevada.

In Michigan and Pennsylvania PokerStars is currently the only online regulated poker room.

Yes. Some big brands with long records of treating their players well are involved in this poker room. SSL technology and separation of player funds are used. If you are worried about handing over your credit card information, there are plenty of alternative deposit options including PayPal, Neteller or even cash.